I happened to read an interesting quote. This one caught my attention as it’s so true, yet so unnoticed, so ‘un-practised’ in practice.

The quote says “The Creative Adult Is The Child Who Survived.” 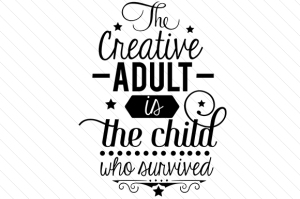 I find that it’s so true. When we’re younger, we’re most in touch with our most authentic self. Our emotions are natural, and they’re the purest when we’re young.  (even though they need to be channelized correctly, hopefully by someone who knows how to channelize them in a constructive way).

Most adults, be it parents, teachers, wives of husbands, bosses etc. want to tell you how to do what you should do. Most adults use this as a way to ‘vent’ and ‘speak out’ and sometimes “puke out” what they want to say, only because they want to say it. They’re not facilitating the child to blossom, but “TALKING AT” the child because they think they’re more experienced adults ‘who know better’ and ‘have seen the world’ and know how ‘it’s always been done’.

This is the saddest thing that can happen, especially if the child/children are perpetually around adults wanting to influence or ‘talk at’ them. Unknowingly, or knowingly, they start to kill the child’s soul, causing a massive disconnect between who the child really is, who the child thinks he or she is, and who the child ends up becoming.  They feel like they’re in a position of power over children, so they lash out at them, verbally and psychologically, and sometimes physically (even something small like a slap, especially when it’s unnecessary and there are better ways of addressing misbehaviour). Some children stay unconscious about how they’ve been influenced, right through until later, when they’re adults. And some adults still don’t realize how they’re being influenced or have been influenced. They just continue to be influenced, not having developed their ‘authentic self’ and finding ground in who they truly are. This lost ‘sense of self’ has major repercussions in later years, as the world, and it’s ways, continue to influence the adult who’s inner child hasn’t been nurtured, watered and cared for. The clever folks in the world often sees this and takes further advantage of the ‘not so sure’ adult.

This blog article is a reminder to all adults, parents, teachers, wives, and other folks out there. Please check yourself in front of children who are looking up to you and viewing you as their guiding light. You are influencing them by not just saying things to them, but by being who you are, in FRONT of them. Do not influence them with what you know (unless it’s timeless wisdom) but facilitate them into blossoming into the truest, most honest expression of themselves. If they express a curiosity for something, help them explore it. If they smile, encourage it. If they’re quiet, ask them why. If they’re not so sure about something, ask them what would help them. If they need help, ask how they’d like to be helped. Never ASSUME you know them and how they should be treated. Never think you’re ‘higher’ or better than them because they’re not fully developed, successful human beings just yet. DON’T MAKE THEM NUMB. If you really think about it, they’re far closer to who they really are, than you are, and have a fresh pair of eyes. See them as flowers to be nurtured, as energies to be channelized into doing what they’re best at given their strengths and talents, as perfection personified who may or may not need to be ‘fine-tuned’ into becoming a little less perfect to survive and thrive in this imperfect world. Just let them be who they are, and help if you can. They’ll be more creative, more fulfilled and more effective as adults!